I did my Week in Faith posts a little different this week. Instead of starting with sacrament meeting I started with Sunday School. The reason is that the last talk in Sacrament meeting had some really great content. And I think it will make a perfect lead-in To my Policy vs. Revelation series. Policy vs. Revelation will compare and document modern Church policies with the Word of God in the Revelations from the Prophets. When I discuss my views with people I’m usually asked in what ways does the church contradict revelation. Most people think that if it does, it probably isn’t contradicting in any large way, or in anything important. So I am going to make a list of things. Then if anyone asks in the future, I can simply show them the list.

Sunday morning we were running a little late. We got do church just in time to partake of our crumb of bread that represents the Body of Christ, and the splash of water the represents His blood. You know I just had a thought. Maybe the reason we have such small portions for the sacrament is because there are some many members of the church today and there isn’t enough of Christ’s body and blood to go around.

While thinking about this I decided to make some cute illustrations. Here is how the church currently practices the Law of Tithing. As part of the Lord’s monetary program I’m sure you can clearly see how this humbles the rich and exalts the poor. According to church teachings, paying tithing, even in the face of utter financial ruin, will bring down the blessings of heaven and you will be able to pay all of your financial obligations. While I’m sure many people have positive experiences in paying tithing according to the Church’s teaching(I have). I believe these blessings come more from willingness to obey, rather than actual obedience. 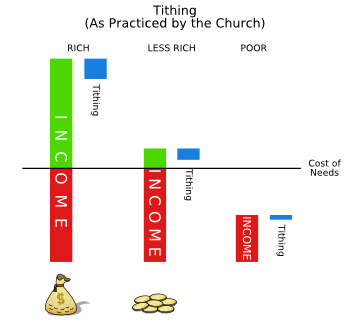 In the below illustration I have shown how the Lord has commanded tithing to function in Section 119. As you will see the donation amounts are smaller but the poor don’t have to give up money they don’t have. This is contrasted to the way the church practices tithing. So even if you are paying tithing as the church teaches you really aren’t obeying the Law of Tithing as given by the Lord. 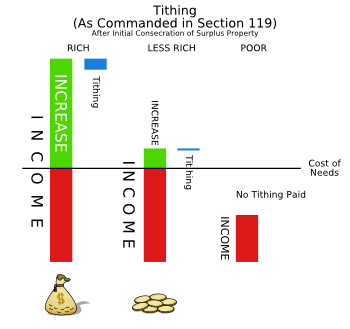 In the above illustration tithing by itself while in someways helping the poor is still is not a fulness of the Lord’s commandments. The full blessings of Tithing can only be receiving in connection with the Law of Consecration. 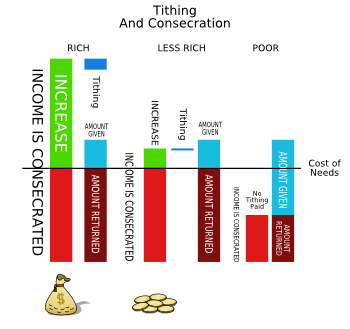 Just what then is the purpose of tithing? Tithing is a portion of the consecrated amount which is given for a special purpose. The rest is put into the treasury to be accessed at will by the people. Tithing money is to be used for:

1. The building of the Lord’s house.

2. The laying of the foundation of Zion.

4. The debts of the Presidency of the Lord’s Church.

It doesn’t matter how much money you throw at the church through “Tithing” or Fast Offerings. You cannot receive the full blessings of the Lord by obeying something He did not command. The rich cannot and will not be humbled, and the poor cannot and will no be exalted, unless we live the Law of Tithing in harmony with the Law of Consecration.

Just a side note, in Elders Quorum I was reading section 89 by myself. I read something that I had never noticed before.

3 It is contrary to the will and commandment of God that those who receive not their inheritance by consecration, agreeable to his law, which he has given, that he may tithe his people, to prepare them against the day of vengeance and burning, should have their names enrolled with the people of God.

4 Neither is their genealogy to be kept, or to be had where it may be found on any of the records or history of the church.

In trying to understand verse three I grammatically simplified the verse. By removing the additional details between the commas, we can see what this verse says.

It is contrary to the will and commandment of God that those who receive not their inheritance by consecration,… should have their names enrolled with the people of God.

In other words, it is contrary to the will of the Lord that a person should have their name enrolled with the people of God if they have not received their inheritance by consecration. Verse four and five tells us that their genealogy should not be kept.

I have a challenge for you. Name at least one person living in the Church of Jesus Christ of Latter-day Saints today that has received their inheritance(land) by consecration. Now, everyone who is NOT on that list, is NOT numbered with the People of God. My name is not on that list, and I’m pretty sure that your name isn’t either. So according to the Word of God you and I are NOT numbered with the People of God. Both your genealogy and mine should NOT be kept in the church.

Anyway I thought that was both interesting and scary.

After the talk that explained the Lord’s Monetary Program the choir sang, “Come Thou Fount.” It was here that the meeting took a urn for the better. I really love that song.

The second speaker was also from the Stake. He started by talking about blessings.

21 And when we obtain any blessing from God, it is by obedience to that law upon which it is predicated.

Which is interesting considering the previous talk. He also said, and I’m not sure if he was quoting someone but, the only thing the prevents us from giving all is faith. Wait did I hear that right? A reference to Consecration is Sacrament Meeting? I think that statement is really true. Aside from the fact no Bishop in the Church will accept a consecration, the only think preventing us from doing so is a lack of faith.

He later talked about the evils of our times. He referenced President Benson in that the evils of our time are much more subtle than in previous times. He warned us against thinking all is well in Zion. Even though we have an abundance of good things we must not be distracted by them. He gave a comparison which, while it may not be scriptural, presented an interesting idea. He said that in Lehi’s Dream the Mists of Darkness were made up of tiny droplets of good things. We must hold to the rod and not let go to seek after other good things. 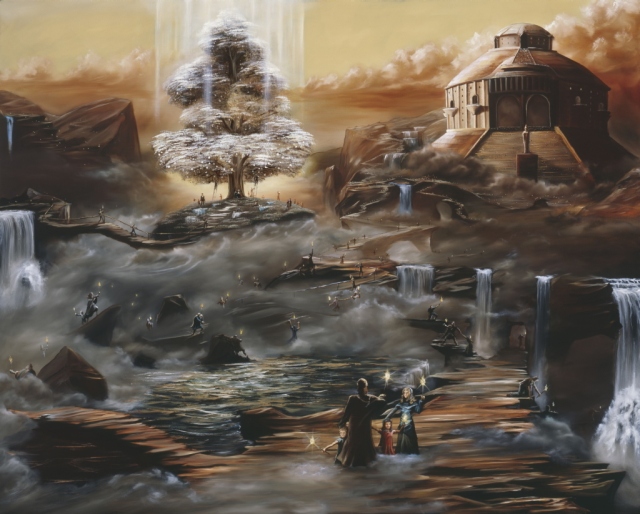 He quoted Elder Oaks in that, just because something is good is not sufficient reason to do it. He said we must seek out the better things. We can knock and ask the Lord. We cannot let go of the Rod and trust in our own judgement.

This was the perfect lead in for my Policy vs. Revelation series. I was going to do a Lehi’s Dream parallel. First we need to know what is the Iron Rod. What is it we must cling to? Is it church policy, scriptures, official declarations, what is it?

23 And they said unto me: What meaneth the rod of iron which our father saw, that led to the tree? 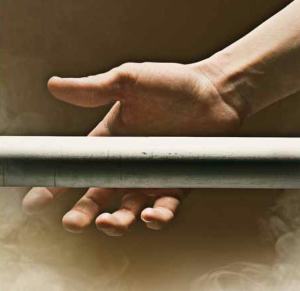 What about deacons and teachers administering the Sacrament? Yes it’s fun for a parent to see their young son fulfilling priesthood duties. It is good. But is it the Word of God? No. We must cling to the Word of God.

You must choose this day who you will serve. Will you continue to serve policies and traditions, which may be good, but are not the Word of God? Or will you serve God?