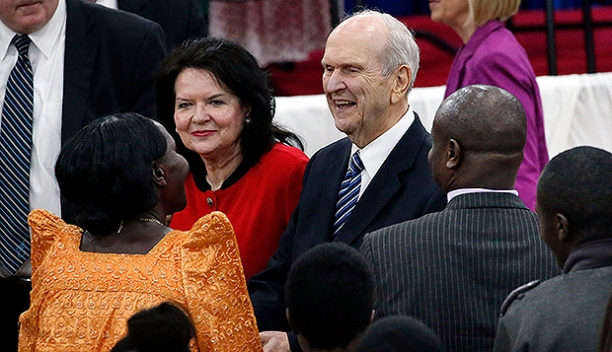 Recently the Deseret News published an article about President Nelson’s visit to Nairobi, Kenya. There he spoke out against the practice of paying a bride price:

“That’s not the Lord’s way,” President Russell M. Nelson told about 2,000 Kenyans and other Africans Monday night inside a large, oval, wooden event center styled after traditional huts in Nairobi, Kenya. “The Lord’s way is to be married in the temple, for time and all eternity, with your children sealed to you.”

He added that if he’d had to pay for his wife, “I would have missed five children, because only with my last five was I out of debt.”

He also taught the importance of paying tithing

The law of the tithe was followed by ancient peoples as taught by Old Testament prophets. LDS faithful believe God restored the law and its blessings for those who follow it by giving one-tenth of their income to the church.

I think these statements by President Nelson really emphasize the importance of knowing and understanding God’s commandments so that we don’t get mislead by cultural traditions.

This means that, yes, paying a bride price IS in fact, in these cases, the Lord’s way. All we need to do is look in the scriptures to know that. That fact that President Nelson back up his statement by using his own western cultural experience, rather than the Word of the Lord, tells us that this teaching is simply his own opinion.

Not to mention that paying a bride price does not exclude one from being married or sealed in the temple. If you’re curious about Bride Prices and Dowries, I recommend this article.

Another false cultural tradition we encounter relates to how people view tithing. Here are President Nelson’s main points about tithing:

First, we need only look at Section 119 of the Doctrine and Covenants to know that the first statement is not what the Lord has taught. In this section the Lord defines that amount of tithing to be paid as this:

1 Verily, thus saith the Lord, I require all their surplus property to be put into the hands of the bishop of my church in Zion,

3 And this shall be the beginning of the tithing of my people.

4 And after that, those who have thus been tithed shall pay one-tenth of all their interest annually; and this shall be a standing law unto them forever, for my holy priesthood, saith the Lord.

To summarize, the Lord defines Tithing in this section as:

An initial payment of all of one’s surplus property, then every year after that, one tenth of their yearly interest.

The Lord has told us that Tithing is NOT one tenth of your income. And paying tithing in the way that Mormon culture teaches can lead to poverty, not alleviate it. It’s simple mathematics. A person who gives 10% of their money away is going to have less money to support themselves than someone who gives away one tenth of the interest of any surplus money they have beyond their needs.

But what about blessings? Surely the Lord will give greater blessing to the person who pays 10% of their income. Nope. That’s not correct. The Lord taught in Doctrine and Covenants 82:10:

If we make up tithing to mean 10% of income rather than 10% of interest on surplus after an initial giving of all surplus, then the Lord is under no obligation to bless us for obeying the fake law that we made up.

But there’s more to the second point that President Nelson brought up, you see, tithing has nothing to do with helping poor people in general. Instead tithing has a very specific purpose of helping the priesthood. Anciently tithing was used to aid the Levites who used it to sustain themselves since, because of their Priesthood duties, they didn’t have any land to produce food or livestock. The Lord gives this same purpose in Section 119.

Tithing is to be used:

2 For the building of mine house, and for the laying of the foundation of Zion and for the priesthood, and for the debts of the Presidency of my Church.

There is nothing in there about helping poor people, or alleviating poverty.

The Lord actually gave us different commandments to alleviate poverty. For example, in Doctrine and Covenants Section 42 we read:

30 And behold, thou wilt remember the poor, and consecrate of thy properties for their support that which thou hast to impart unto them, with a covenant and a deed which cannot be broken.

31 And inasmuch as ye impart of your substance unto the poor, ye will do it unto me; and they shall be laid before the bishop of my church and his counselors, two of the elders, or high priests, such as he shall appoint or has appointed and set apart for that purpose.

That’s right, the Lord has given us consecration as a way to care for the poor. Namely we are commanded to gather to Stakes of Zion and consecrate everything we have to the Lord. Everything that is in excess of what we need and want will be used to help the stake wherein we reside. To put it simply, we gather in groups and pool our resources. It’s nothing more amazing or magical than that.

One of the reasons we have the scriptures is to help us avoid putting our cultural traditions ahead of God’s commandments. These statements of President Nelson are not consistent with what we know about the commandments of God, so we must be careful to avoid focusing on them at the expense of the actual commandments of God. I’m not telling you to disregard everything the President Nelson says. I’m just saying that we should be careful and check to make sure that What he says is from God, before we go run with it as if it were doctrine.

1 Response to Cultural Traditions Do Not Trump God’s Commandments