Monotamy is Unnatural or My Hominem Beats Your Hominem 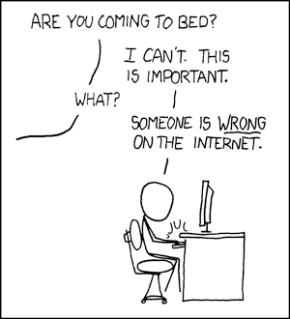 Aside from the Professor’s disgraceful Ad Hominem attacks I will address some of his points here:

Professor: Your prose are rife with fallacies and Neanderthalic musings,

This itself is a fallacy and illogical. I’m surprised that a Professor would accuse someone of being “Neanderthalic.” It has been proven that Neanderthals were a very intelligence and skillful subspecies of humans. In fact most people of European descent have 5% Neanderthal DNA inside of them. Neanderthals even had larger brains the modern humans.

Professor: Sexual unions between humans are not meant to be permanent.

I disagree. Adults benefit from long term sexual unions. Children also benefit from a large community of committed adults. However the professor is right in that humans are not designed to be limited to one long term sexual companionship. We have been culturally programmed to believe that is the case, but both biology and psychology indicate that we are not.

Professor: You do not find it often in the animal kingdom, and where you do it is generally born of an evolutionary necessity. The necessity of monogamy among humankind has evaporated.

This is misleading. He is attempting to minimize the concept of monogamy in the natural world. From what I understand monogamy is fairly common in the natural world. Is is relatively uncommon in the primate world though. He is also incorrect that there was a necessity of monogamy among humankind that has since evaporated. This is not correct. There has never been a necessity of monogamy in human history except for that imposed by ancient and modern western culture(and the Chinese). And in these cases monogamy was instituted to control men and women.

Professor: It is your constant reinforcement of archaic relationship models that really does the profoundest of damage.

Professor: I am married. I’ve been married for 15 years and my wife and I both sleep with other people. We are honest about this, which makes our open relationship more healthy than “monogamous” relationships built on lies.

I agree that an open relationship is better than a monogamous marriage where the spouse cheats and lies(my interpretation of “built on lies”). However a polygamous marriage of committed people is much better than any “open marriage.” It provides safety and security for all people involved. It is much better than temporary sexual trysts with no commitment or cause for support. The professor’s noncommittal “Open Marriage” is very damaging because it treats humans as commodities. They are used for their sexuality. With a polygamous marriage all people involved are valued. They all support and benefit from each other.

Now on to Matt:

Matt: (After addressing the Professor with much sarcasm) No, my dear Professor, I am a humble man and I can only write in plain language, using words that, you know, exist.

This is an appeal to Pathos because he is appealing to the understanding of his audience. It builds Ethos in their eyes because they can relate to being the simple, humble people. He is trying to build authority to his audience will accept his later arguments because they are on the same team.

Matt: A married person who doesn’t believe in monogamy seems an awful lot like a Satanist in a church choir, or an existential nihilist performing lifesaving heart surgery.

Matt: Monogamy is not natural. You’re right about that. It’s supernatural.

An appeal to emotion. It is not rational. Matt presents no evidence to show that monogamy is better than Polygamy. Instead he relies on the readers culturally engrained positive feelings about monogamy to prove his point.

But it’s time to face facts; our culture is wrong. We are not monogamist creatures and we are doing harm to current generations and will continue to harm future generations if we continue this farce. And yes I can list the ways monogamy is damaging our society if you really want me to.

Matt: If I wanted to be natural, I could live in a hole like a rodent, eat insects, and scamper from one mate to the next, until, after a life of nothingness, I die alone in the cold darkness, decomposing into the dirt without anyone ever noticing. That would be natural. It’s probably pretty realistic, too. So it is fortunate that I am a human being and I am given the chance to transcend the existence of a rat or a lizard. I have the opportunity to experience supernatural things like love, and sacrifice, and commitment.

False analogy. Even the most early humans had experiences transcending those of rats of lizards. This comment reeks of ethnocentricity and cultural evolutionism. Ancient humans living in communal multi-mate tribes experienced more love, sacrifice, and commitment than Matt will probably ever in his monogamous marriage.

You see, unlike the Hollywood images we are given of ancient cavemen who say “ug.” Humans who are more in tune with the natural environment are remarkably sophisticated. I would say that in many way they are more advanced that modern humans because they were in harmony with their surroundings. Can you say the same thing for our modern society of big cities, pollution, smog, and lacking intimacy?

Again no information is offered to back up this assertion. But it feels good to the audience because it reaffirms their engrained cultural biases. That statement is also ethnocentric. Granted it is rebutting an “open marriage” but the idea is that somebody who loves more than one person cannot be loyal to all of them. That monogamy is higher and more loyal than polygamy. That is ridiculous and can be easily dis proven. The idea of monogamy being “higher” doesn’t make any sense(Really what does that mean anyway?). How do you rate something as being “higher?” Higher in relationship to what standard of measure?

Matt: Why should it be hard for me to simply refrain from tossing such a gift into the garbage?

Polygamy does not toss people aside as garbage. Polygamous families are just as capable, if not more, at valuing all people in the family. It is you cultural training that tell you that if a man is married to multiple women(polygyny) each women only gets a portion of the man. Or that a man must leave one of his wives to be with the others(again using polygyny as an example). But that is all hogwash. You seem to value the idea of humans transcending something. So why not transcending the numbers game that anti-polygamists play? Love is not a limited commodity. The more love the better. Can you say there is such a thing as too much love?

Matt: Marriages, by definition, are supposed to be closed.

Upon further reflection I actually disagree. I would say that marriage by definition are supposed to be committed. But I say that carefully because there are many societies where the man and woman stay separate. The wife will stay with her family and her brothers will take on the father role of her children.

It is western culture that has placed the “closed” limitation on marriage. It does not have to be there and does not mean that once a person is married they are incapable of entering into other marriages.

Matt: If you aren’t strong enough to stay committed to one person, that’s your business.

I could say , “if you aren’t strong enough to stay committed to multiple people, that’s your business.” But it carries no weight other than to impress your audience by sounding “romantic” This idea is based on American cultural assumptions. It makes the reader feel good about their ideas rather than presenting any real data to back up the assertion.

I pity the man who has to fight so hard against his instincts to maintain a cultural ideal that has been created arbitrarily and handed down to him by tradition alone.

I suggest you get a copy of the book “Sex at Dawn.” It goes into great detail about how human mating is deigned to work. It gives examples of many modern tribes to show how our even more ancient ancestors lived. The proof is in the pudding as they say.

Now don’t be scared, it doesn’t read like a text book it is actually very fun and entertaining to read. So it is perfect for humble men who can only write in plain language.

I believe that God’s(or Nature’s; you can choose but I find the distinction meaningless) design for mankind will ultimately prevail and we will be able to throw of the false traditions of modern society. We will be able to return to a more harmonious way of living. And how do we teach our children to live harmoniously with others? Is it by teaching them to be selfish or to share?