Signs and Wonders in Heaven

A while ago I watched a video with my cousin. The video was called the Star of Bethlehem. You can buy the DVD here. While I would suggest buying it, you can find everything the guy talks about on the DVD and more, for free on his website. The guy, is Fredrick Larson. I wont give his whole history but basically he took clues about the star from the Bible, bought some night sky software and tried to find something that fit. That’s really an oversimplification but it will do for this post.

Mr. Larson came up with nine points for the Star of Bethlehem:

1 It signified birth.
2 It signified kingship.
3 It had a connection with the Jewish nation.
4 It rose in the east, like other stars.
5 It appeared at a precise time.
6 Herod didn’t know when it appeared.
7 It endured over time.
8 It was ahead of the Magi as they went south from Jerusalem to Bethlehem.
9 It stopped over Bethlehem.

Before watching this program I was leaning towards the Star of Bethlehem not being an actual star but something more like the pillar of fire that guided the Israelites. But Mr. Larson proposes that Jupiter(considered a moving star in ancient times) was actually the Star of Bethlehem. And I find is reasoning compelling.

I’m only going to give a quick summary of Mr. Larson’s ideas and expound on my own discovery.
One important piece of information in dating Christ’s birth is the death of Herod. Many scholars date Herod’s death to 4 BC. However Mr. Larson along with other scholars claim this is a translation error and that Herod died in 1 BC. This is important because in the years 3 and 2 BC some spectacular celestial events took place.

Mr. Larson discusses how Jupiter, the King planet, began a retrograde motion around Regulus, the King star. Retrograde motion is where a planet or or celestial object appears to move backwards along it’s orbital path. This phenomenon occurs because we are viewing the stars and planets from earth, which is itself orbiting. It is like watching someone walking forward as you drive past them. Even though they are moving forward they appear to you to be moving backwards.

When viewing Jupiter from earth it will move forward for a time and then slow down and move backwards. The backwards motion does not last as long and Jupiter again moves forward.

Jupiter retrogrades over or near Regulus about once every twelve years. However the retrograde of Jupiter past Regulus during the years 3/2BC may have signaled one of the most significant events in human history. On September 14, 3 BC Jupiter passed Regulus. 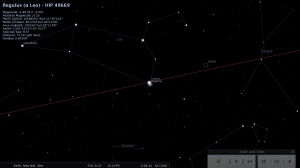 Then on November 23, 3 BC Jupiter stopped its movement to the left(using the image as reference). After this date it began to move right. Then on February 15, 2 BC Jupiter passed Regulus moving to the right. 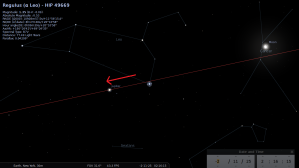 March 26, 2 BC Jupiter stopped its movement to the right and began moving back to the left. 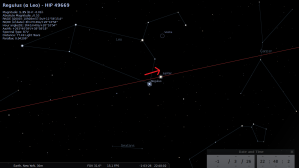 It would therefor move past Regulus once more as it continued its path in the sky. Mr. Larson notes how similar this action is to forming a ring or crown over Regulus. He calls this the coronation of Regulus, thus symbolizing a King. Also Regulus is a star that forms part of the constellation Leo. Leo or a lion is the symbol of the Tribe of Judah.

Mr. Larson is a Christian and I presume he does not accept the Book of Mormon as scripture. However I do. And this is where I will present my own observations. In the Book of Mormon Samuel the Lamanite prophecies about the birth of Christ. He prophecies that the day before Christ will be born the sun will go down but there will be no darkness. Then the sun will come back up and it will be as if it was one day. The the next night a new star would arise and there would be signs in the heavens.

First I would like to discuss my discovery as it relates to the star. After that I will talk about the night that was light.

5 And behold, there shall a new star arise, such an one as ye never have beheld; and this also shall be a sign unto you.
6 And behold this is not all, there shall be many signs and wonders in heaven.

While using Stellarium to examine Mr. Larson’s observations I thought it would be interesting to switch my location from the middle east to North America. So with my observation point in New York I watched the same events that I had just watched. What I saw was amazing.

If we look at the sky from the middle east on the night of February 16, 2 BC we see Jupiter and Regulus about to set. Notice that the moon is to the right of the two.

Then as night begins to fall on the next day, we see the moon rise but now it is to the left of Jupiter and Regulus.

But if we switch to New York we see the moon rising to the right of Jupiter and Regulus. It is the beginning of the night of February 16, 2 BC.

At the end of this night the moon sets on the left of Jupiter and Regulus. 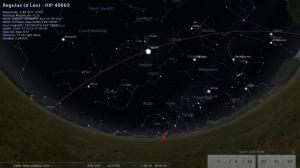 Here is a close up view of the event.

The Moon, Jupiter, and Regulus are not only in perfect alignment, but they are very near to each other and are nearly at the highest point in the sky. This event, appearing high in the sky, is only visible from the Americas. I believe this event is a fulfillment of the prophecy of Samuel. As such it also gives us the birthdate of Christ as February 16, 2 BC. According to the signs which I have observed using the Stellarium program I believe this is the birth date of Christ.

While there is nothing in Stellarium that explains this event I believe it is explained by another event.

I pondered about what could possibly cause the sky to light up without the sun. My first thought was a full moon. But while full moons are bright they could hardly match the scriptural description of the event.

Then I thought of the Northern lights. They light up the sky. But then again it doesn’t really look like day time. In all the pictures I’ve seen they are just streaks of light in the sky. But then I discovered an interesting event. On September 2, 1859 there was a massive solar storm.

This storm caused aurora to be seen as far south as the equator. This is the largest auroral event recorded in history. According to records from the time the aurora was visible all night. But what if an event of this magnitude or greater occurred back on the night of February 15, 2BC?

Here is a picture of an aurora that occurred back in 2003.

This aurora is no where near the intensity of the 1859 one. Yet look how it lights up the sky. Now imagine the 1859 event being even brighter than this. Then imagine the 2BC event even brighter still. It then becomes easy to see how the sun could go down and the night would appear as day until the sun came back up.

Granted this is all speculation and I don’t have anything to back up my theory. But it is an interesting thought.
Lets say that the aurora phenomenon did cause that event. Then the next night Jupiter, the king planet, Regulus, the King Star, and the moon align perfectly high in the sky. Throw in a meteor shower or something and this event could have been one that no inhabitant of the America’s had seen before. And it would have fulfilled prophecy.

Another interesting event occurred on June 17, 2BC. It was this alignment of Jupiter and Venus.

Mr. Larson associates this sign with the birth of  Christ and the previous event with His conception. I disagree however. I don’t have an alternative explanation for this sign though. So I’ll leave it up to you to decide.

The star is described as stopping over Bethlehem, thus showing the Magi where the Saviour was. But how could a star stop. Well, if the “star” is the planet Jupiter then its stopping can be explained by retrograde motion.

When the planet Jupiter moves along its orbital path is must stop its forward motion to begin its retrograde. And we find Jupiter doing this exact thing on an interesting date. On December 25, 2BC Jupiter began another retrograde motion. If viewed from Jerusalem, this would have occurred towards the south over Bethlehem. 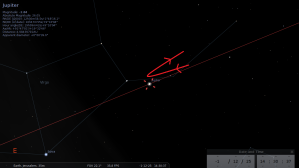 The Moon Into Blood

Mr. Larson also found an eclipse that would have occurred at the time of Christ’s death.

20 The sun shall be turned into darkness, and the moon into blood before the great and notable day of the Lord come;

On April 3, 33AD there was a partial Lunar Eclipse. 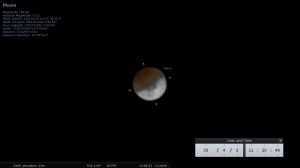 It is possible that this was the date the Christ died on on the Cross. If Christ was in the Spirit prison for 3 days the date of his resurrection would be April 6, 33AD.

Woman Clothed with the Sun

1And there appeared a great sign in heaven, in the likeness of things on the earth; a woman clothed with the sun, and the moon under her feet, and upon her head a crown of twelve stars.

There is an interesting celestial movement that occurs about once a year. The Sun moves through the constellation Virgo. And at the feet of Virgo is the moon. Virgo the virgin is clothed in the sun with the moon at her feet. As for the crown, I don’t know what it is. Is this the basis for what John saw? 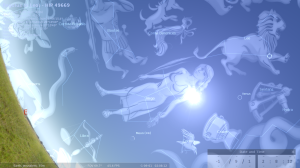 I encourage you to read Mr. Larson’s webpage. He goes into much greater detail than I could. But he wont tell you about the Book of Mormon stuff though. The stars and planets really do testify of God’s works. I think we are missing a huge part of the picture if we forget to look to the heavens for signs and symbols.

As those who are to bring the gospel to our fellow gentiles and the Jews we should be the first ones to notice these things. But maybe we are too distracted by the big city lights of Babylon. I hope all of you will take time to look to the sky for the signs of God’s work. As we get closer to the second coming of Christ more and more signs will be visible in the skies and it will be up to us to read them.

Note: The BC dates on my images are off by one year. This is because Stellarium has a year 0. So when Stellarium reads the year as -1 it is really 2BC.

17 Responses to Signs and Wonders in Heaven