I’m afraid this post will be sort of a let down after a long silence. But not much really happened at church. We had two sacrament meeting speakers. One was asked to speak about Elder Bednar’s talk. I thought it strange that a person would be assigned to give a talk, on a talk. Shouldn’t speakers speak about topics rather than just regurgitate words we’ve already heard. That way we can get some additional insights.

I might have had more to report than this but while Sunday school was starting my wife asked me to help her in Nursery. She was the only one there and needed someone else to help. So this is what I did in Church: 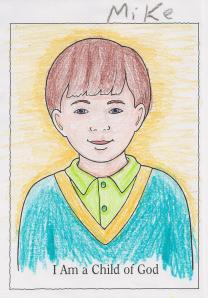 I think many of the Nursery kids can color better than me.

During Sacrament meeting my thoughts were once again brought to the validity of the L-DS Sacrament. Is our sacrament valid even though it is administered incorrectly? The three offices God specifically barred from administering the sacrament(Priests are allowed when no elder is present) are the one who DO administer it on Sunday. Isn’t changing the ordinances what lead to the Apostasy of the Early Christian church? Wasn’t it those who had no authority, acting in capacities requiring authority, who contributed to that apostasy.

So here, once a week all over the world, we have people not authorized to administer the sacrament, administer it. We might as well allow the young women to participate. There is no scriptural admonition prohibiting Beehives, Mia maids, or Laurels from administering that sacrament.

I don’t know maybe I just want our sacrament to be invalid. Am I nitpicking to so I CAN find something wrong with the Church? Do I want the Church to be in apostasy, so I’m finding problems where there are none?

Who authorized this change? Where is the revelation? If there is a revelation it would contradict what was already given. And since it contradicts it cannot be from God. If there was not a revelation, the action itself contradicts and is not inline with God’s will.

(Just a side note, I remember when once a month the Elders and High Priests would administer the sacrament. That seems to have been done away with.)

So our sacrament is not being administered according to God’s will. Does that mean God looks at the intents of our hearts and still accepts that ordinance as valid? Or does God give his commandments for a reason and will judge us by what is written? Or does it really not matter and God will accept whatever we do so long as it is backed up by tradition and some leaders words?

At this point a really don’t have the answers. What I do know is that next week when the Priests bless our smidgens of bread and our specklets of water; I will kneel with them. If the sacrament is not valid it will do me no harm to participate and help bring awareness to the contradictions within our Church. If the sacrament is valid then I should be participating in the way it was revealed.

This entry was posted in Uncategorized. Bookmark the permalink.